With the potential to address several of the United Nation’s Sustainable Development Goal (SDG) impact indicators1, green bonds can be an effective instrument to help to address environmental challenges and particularly climate change. However, to make a material contribution to environmental goals, green bonds require scale without compromising on their ‘green’ credentials.

Green bonds, which are explicitly designed to raise capital for projects with clear environmental benefits, offer a tangible route to investing in the low-carbon economy.

Here we look at the growth of the market, particularly in China, and how it has the potential to provide significant support in the transition to a ‘greener’ Chinese economy.

The green bond market continues to develop at a significant pace, with demand particularly strong from institutional investors. In 2017 there was more than US$120bn in new issuances, making it a record year for green bonds (Exhibit 1). 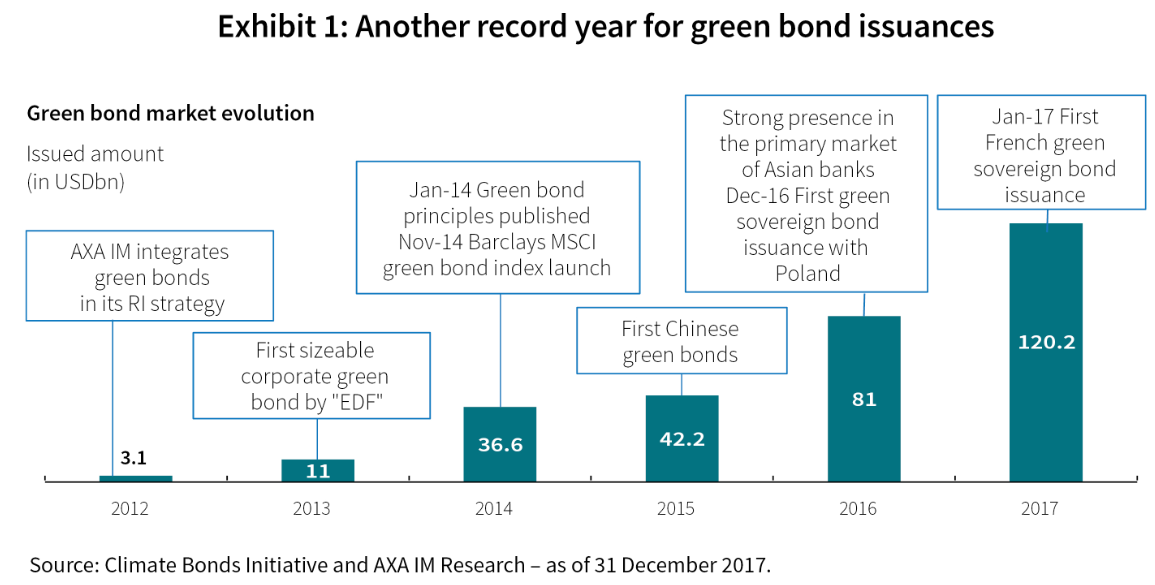 According to the Climate Bond Initiative (CBI), 54% of green bonds have been allocated to socially responsible and/or green investors. Institutional investors have a large share of green holdings as the market offers transparency and environmental benefits at similar prices to non-green bonds from the same issuers.

In a high demand environment, pricing is key. In a sample analysed by the CBI, pricing for most green bonds was in line with prices achieved on ‘traditional’ new issuances. Additionally, on occasion, green bonds in the secondary euro corporate debt market performed better than traditional bonds (although this has not been the case in the US dollar sector). Strong demand has seen oversubscription ratios above 2 (for both euro and dollar green deals).

Liquidity has improved significantly over the past two years, with bid/ask spreads compressing, allowing better trading in secondary markets. Existing issuers have continued to be active and the green bond benchmark transaction issued by the French State early 2017 offered undisputable liquidity to investors.

2018: the expansion of private financing for the Chinese green transition

While Chinese issuers accounted for 30% of global issuances in 2016, primary market activity tapered off in 2017 following Beijing’s attempt to deleverage the financial system. We think this halt is temporary, and issuance will resume as China accelerates its green transition. Even with this decline, China remained the second biggest issuer after France.

In its 13th Five-Year Plan, the Chinese government set ambitious carbon emission reduction and energy efficiency targets. The plan will mean rebalancing China’s economy away from a highly-polluting, energy-intensive and investment-driven growth model towards a green, efficient and sustainable system, powered by consumption and services.

To achieve these goals, the People's Bank of China (PBoC) estimates that an annual investment of at least RMB 2 trillion to RMB 4 trillion, (US$320bn to $640bn), will be required2. Considering only 10% to 15% of this will be funded by public finances, a way to channel the remaining 85% from the private-sector  is needed. 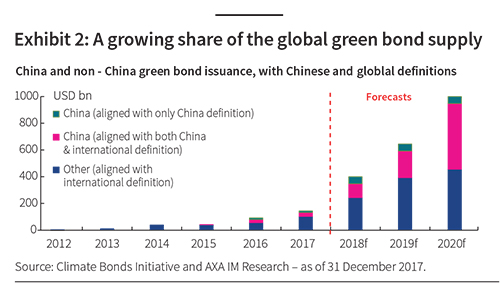 This forecast is for illustrative purposes only, and does not constitute an offer to buy or sell. It does not constitute a reliable indicator of future performances. These forecast returns should not be relied upon and no representation is being made that any fund or strategy will or is likely to achieve profits or losses similar to those shown herein.

Common international standard is within reach

In December 2015, the PBoC released a set of rules  becoming the first country to have clear regulations governing its green bond market. Nevertheless, the coexistence of other standards3 can create risks and confusion that may harm the development of the market. A future harmonisation of these rules is vital for improving clarity and investors’ confidence in Chinese green bonds.

Comparing China’s green bond standards with  the usual international ‘standards’ shows that there are still some deviations. Some projects, mainly relating to fossil fuel, are eligible for green bond financing in China, but are excluded by the international principles. In addition, global investors are concerned about the level of transparency and credibility of reporting, despite more than 70% of onshore issuances last year being independently verified4. Furthermore, even for the interested investors, market access can be a practical hurdle, given China's controlled capital account and limited convertibility of its currency.

Despite the outstanding issues, the Chinese authorities are moving fast to develop and liberalise the market. The PBoC has been in discussions with regulators, issuers and investors in Europe, such as the European Investment Bank, to develop common standards for the green bond market and an update is expected next year. Finally, Beijing is determined to continue the path of capital account liberalisation, which will ease foreigners’ access to the onshore market.

With the market still in relatively early stages of development, investors should be mindful of potential cases of ‘green washing’, where inappropriate projects receive financing simply by applying a green bond ‘stamp’. To combat this, thorough research of each issue and insight on individual issuers is essential. The lack of common standards on green bond eligibility criteria in the global market means that  systematic monitoring and follow-up analysis are necessary to ensure issuers are delivering on their promised environmental impact.

3Other regulators, such as the National Development and Reform Commission, China Securities Regulatory Commission and the Shanghai Exchange, have developed their own standards