Voting at company meetings remains a crucial part of the dialogue between a company and its shareholders and we at AXA IM continue to hold voting as a fundamental aspect of our fiduciary duty to our clients.

We continue to withhold voting in markets that require investors block shares or have imposed onerous administrative requirements for the exercise of voting rights (for instance Argentina, Bulgaria, Hungary, Iceland and Latvia among others). However, should a company meeting be held where an issue may be required to vote on by fund managers, we continue to retain the discretion and the ability to vote on that particular company and meeting.

Of the 5,251 meetings voted to September of this year, we did not fully support management at 2,275 meetings. This amounts to a nearly 43% level of dissent and shows our determination and continued commitment to ensuring that our votes cast promotes our clients’ long term interests. 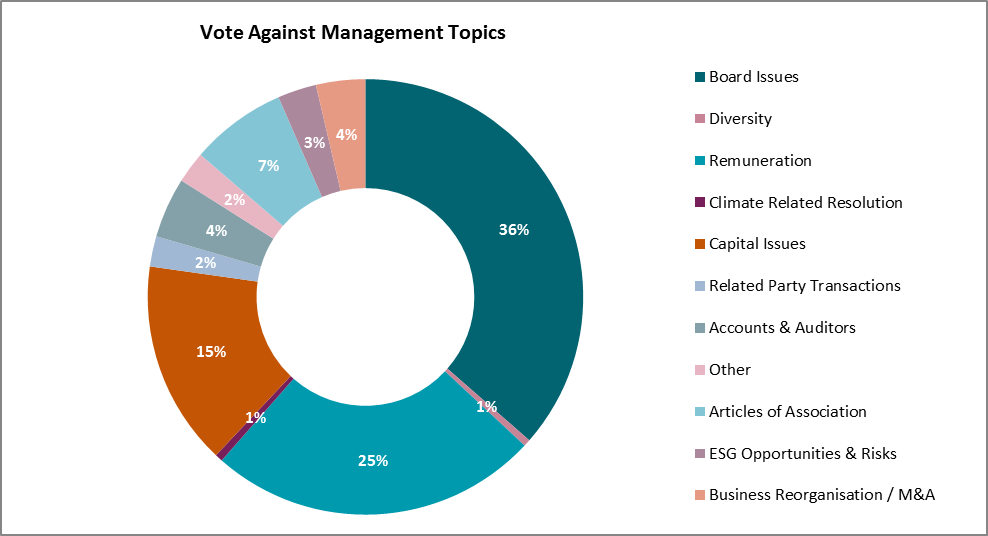 Earlier this year, AXA IM announced[1] its intentions to toughen its stance on diversity of companies, including by voting against companies which do not explain how they will boost the number of women on their board and workforce and where all-male boards continue to exist in developed market companies.

This follows nearly five years of engagement with companies on this topic. As noted by Shade Duffy, Head of Corporate Governance, the aspiration here is ‘not just about leadership or the visible face of a company, but rather about the broader workforce and the progression of women to roles where they can influence strategy and performance’.

Whilst a better picture will emerge of how many resolutions and company meetings this has impacted at the end of the year, this toughened stance has so far led to votes against 26 resolutions across 20 companies for the nine months to end of September of this year. Similarly, we have supported shareholder resolutions at companies like Discovery, Inc. calling for a report on steps taken to increase board diversity, as well as at Starbucks where a shareholder proposal called for the company to prepare an employment diversity report and report on diversity policies.

As part of its commitment to diversity and human capital topics, AXA IM is involved in the Workforce Disclosure Initiative[2], and lead the shareholder engagement with eight companies to encourage them to reinforce disclosures related to workforce, with diversity and inclusion being a key dimension.

During the year, illustrating our commitment to fighting climate change, we continued to hold constructive and challenging discussions directly with companies, and as part of a coalition of investors (including the institutional investors group on climate change[3]), engaging with companies in key sectors. These discussions focus on strategies to manage the challenges posed to businesses by climate change and emerging regulations in a carbon constrained world.

This is evident in our backing for the majority supported climate risk – two degree scenario resolutions at Kinder Morgan and Anadarko Petroleum as well as supporting a shareholder resolution at Royal Dutch Shell, which called on the company to look into setting and publishing long term greenhouse gas emissions targets.

In addition, under the framework of the ‘Climate Action 100+’ initiative, a 5-year investor coalition coordinated by UN PRI and other international investor networks to engage with the world’s 150 largest corporate greenhouse gas (GHG) emitters, AXA IM as a signatory investor was proposed to lead the shareholder’s engagement with a subset of companies and also to co-lead or otherwise participate in engagement with a number of other companies.

On Pay and Reward

Globally, attention is starting to move away from a sole focus on aligning executive rewards with share price performance, to a focus on how executive remuneration aligns with the general workforce and social expectations.

Some of the reforms recently undertaken include the publication of gender pay gaps in the UK and the Dodd-Frank requirements to disclose CEO pay to median pay ratio in the US, which have revealed some extreme pay differentials. AXA IM is always supportive of reforms that require improved and increased disclosure, allowing shareholders further clarity and better oversight of the companies in which they invest. This can be seen in our support for a shareholder resolution at Alphabet, Inc., calling for a report on the gender pay gap.

However, ultimately the majority of discussions on pay continues to revolve around quantum, targets, performance and alignment. AXA IM continues to hold companies to the highest of standards and where we feel that there is a misalignment between pay and long-term shareholder interests we will continue to dissent from management recommendations. This can be seen in examples such as Persimmon and Tesla (excessive quantum), WPP plc (good leaver provisions) and many others.

Not for Retail distribution: This document is intended exclusively for Professional, Institutional, Qualified or Wholesale Clients / Investors only, as defined by applicable local laws and regulation. Circulation must be restricted accordingly.

This promotional communication does not constitute on the part of AXA Investment Managers a solicitation or investment, legal or tax advice. This material does not contain sufficient information to support an investment decision.

Due to its simplification, this document is partial and opinions, estimates and forecasts herein are subjective and subject to change without notice. There is no guarantee forecasts made will come to pass. Data, figures, declarations, analysis, predictions and other information in this document is provided based on our state of knowledge at the time of creation of this document. Whilst every care is taken, no representation or warranty (including liability towards third parties), express or implied, is made as to the accuracy, reliability or completeness of the information contained herein. Reliance upon information in this material is at the sole discretion of the recipient. This material does not contain sufficient information to support an investment decision.